The Bike of Mormon 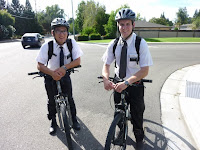 Cycling is the closest thing I've come to finding a calling. As a philosophy major at UC Berkeley, I analyzed religion but never adopted it. Over my life, I've sampled a few (buddhism, hare krishna, numerous flavors of christianity) but nothing really took. The only message that ever touched me was that, afterlife or no, the earth sustains us now so caring for it ought to be a high priority.

Back in the 80s, I did a semester of college in central Los Angeles. The Iran-Iraq war was causing oil price spikes. A family friend's 5 year old son died after he was hit by a car in their neighborhood. Smog alerts and traffic jams were a frequent part of the nightly news.

Given all this, I was pretty passionate about doing something real and immediate to eliminate pollution, oil addiction, and car domination. My answer was to use only a bike to get around Los Angeles. But after a couple of months cycling between Watts and Westwood, my breathing got strained and I was coughing up black soot with regularity. This is not to mention all the hazing and near death experiences from cars. I lost faith in my cause. I felt like the world would never see what I saw in cycling: a way to solve so many huge problems all at once with so little.

More than 20 years later, my faith in the promise of cycling has been rekindled by all the news from around the world about the great awakening to cycling's benefits: to reduce obesity, healthcare costs, budget deficits, etc. So it was interesting timing to run into a couple of fellas using cycling to proselytize their faith. 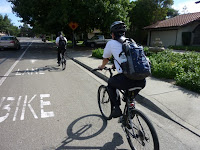 I've seen missionaries in many settings but never on bikes. I was impressed: partly because the church obviously recognized how effective bicycles can be as a serious mode of transport and partly because cycling in their attire on such a hot day already displayed a lot of passion for their faith.

Given my travails in LA years earlier, I felt for these guys. Fascinated, I chased them down and asked for an interview. A few weeks later, we met in front of the local bike shop and went for a ride. They brought me back to one of the churches they work with in the area. We stopped and had a nice chat about their mission, their faith, and their cycling. 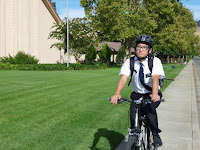 What a journey for these guys. Elder Campbell came from Canada and Elder Kim came all the way from Korea (and speaks perfect English). They had never met before they started their mission. Yet, they are deeply united by a profound sense of being blessed and an intense desire to share that with as many people as possible. To this end, they cycle as far as 20 miles at a stretch for hours each day. They'll continue this for 2 years. They say it is all worthwhile, especially, when they see someone really receive their message.

It turns out, Mormon missionaries have a long tradition of cycling. There are even websites, like the missionary depot, dedicated to helping them obtain cycling gear. Not all missionaries cycle but quite a few do and have for years. I am impressed to see this zeal for bikes within the Mormon church. Cycling seems a perfect fit for all Christians, not just Mormons, given it reflects at least 4 of 7 heavenly virtues: temperance, diligence, patience, and humility. I'd argue you could include kindness (to the earth).

Cycling runs in the family as well as the church for Elder Campbell. He comes from a family of downhill mountain bike racers. The terrain in Canada is perfect for that. However, he says he never biked as much as he does now and does not expect to use bikes for transport much after his mission. He says there's too much snow back in Canada to make it a viable transport option in winter. I mentioned to him, that it is possible to ride in snow.  I told him about the folks I found cycling in Jackson Hole last December but I agreed it is challenging.  Regardless, after his mission, he plans to get a road bike to keep in shape. 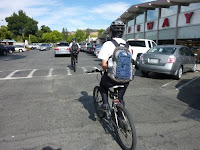 I asked them about some of the realities of cycling. For instance, did they get hot in their uniforms? That was a definitive "yes" but the church allows no alternative to the standard uniform even while cycling. The goal is to look professional while performing church duties. They certainly do that, even if the guys do look a little glossy after a ride.

Elder Campbell told the story of getting his seat stolen and having to ride home without one. Now they are experts at knowing which neighborhoods are the most vulnerable. Beware of Monument boulevard they said. "Everyone gets their bike stolen there".  I recommended a few things from my post about Cycling and Security.

Both they and I noted how both missionaries and cyclists are often antagonized, or anyone dressed or acting differently for that matter. For cycling missionaries, it's a double risk. Some drivers and pedestrians can be downright hostile to cyclists. They confirmed missionaries can sometimes experience similar hostilities both on and off the road. These experiences are painful but we both agreed they help us empathize with folks who don't fit a particular mold. 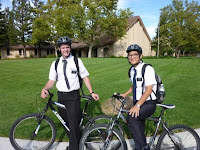 While we commiserated about the challenges of spreading our respective messages of hope, I realized that I feel like a bit of a missionary myself. Only, my gospel is cycling.

Though our belief systems differ, I wish them the best of luck in their mission and a safe journey on their bikes and beyond.
Posted by Unknown at 9:07 PM 62 comments