Another Bike Commuter is Born 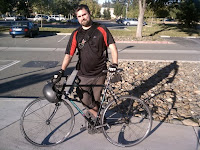 This week saw the maiden ride of another convert. Bryan, one of my co-workers, has entered the bike commuter fold.

Bryan has biked sporadically all his life. One of his fondest memories was riding in the rain in Maryland as a kid. Most cyclists don't like the rain but I can actually relate. If you've got the right gear, riding in weather is down right fun. That bodes well for Bryan's perseverance as we enter the rainy season.

He says he's decided to start bike commuting because it "just makes so much sense". He lives less than 10 miles away from his job. With that short of a distance, he can beat a bus because of all the stops they make. He also leaves when he wants like he would if he drove. The fitness and smaller gasoline bill are a nice bonus as well. 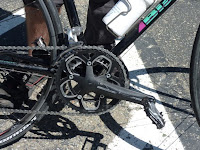 I am particularly proud of Bryan's conversion because my donation of a crankset helped make it possible. The FSA crank from my Cannondale was just lying around and his Bianchi needed one so I donated it to him in accordance with the PlanBike mission. 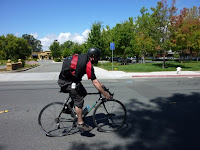 Several weeks later he's gliding next to me using the crankset. Too cool.  He's already on his 5th consecutive day. I was pretty saddle sore when I started and had to take a break. Between his love of rain and his strong start, Bryan's in danger of being a hardcore bike commuter. 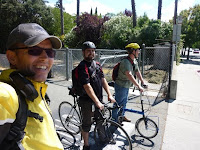 Here's a picture of Bryan, Ed, and I on our first lunch trip. Check out Ed's cool folding Bike Friday "Tickit to Ride". Turns out Ed is also a recent convert. Just 16 months. Having a mobile posse greatly expands our lunch options. This time we only went about a mile out. Still, the ride made me feel better about chowing down. 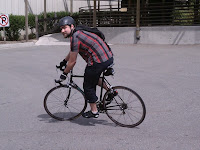 Just five days in and he's already bought clipless pedals and Sidi shoes and loves them. This guy has got the bug. Right on. We need more like him.

Welcome aboard, Bryan. I can't wait for us to pedal out to all the new lunch possibilities.
Posted by Unknown at 11:48 PM 10 comments