NOTHING stops London cyclists. As evidence, witness this video.

Keep calm and pedal on


It's been a while since the last post on this blog. A lot has changed with the world since 2015. Fortunately, one thing that hasn't is Londoner's commitment to cycling as serious transport.

I first witnessed this on my way to the Journée Sans Voiture: Paris' closure of major parts of the city to cars. Flying in and out of London, gave me a chance to catch a truly magical London Critical Mass and an all too brief daytime tour of the city for the day before my return.

As great as the Paris tour was, I returned home most spellbound by the transformation I witnessed in London. The irony was Paris had the bike lanes but London had the riders. The contrast in ridership was stark: not only between the two cities but between present day and the 1990s London I first witnessed.

I knew I had only scratched the surface of the London cycling experience so I vowed to return soon for a deeper look. It took two years but I finally made it back.

Originally, when I shared how moved I was by the volume and range of people cycling in London, one ex-pat Londoner in America said it was due to the Congestion Charge not romance for cycling.

My heart sank a bit at this but I was determined to find this was false and that I did. Every London cyclist I asked said it was a massive cultural shift in the city: that their love of bike racing and commuting was real. One rider described bike commuting: "like a magic carpet ride around the city". Another enjoyed the feast for the senses you get with a bike that a bus or car cannot match. None said anything about the price of driving.

Nevertheless, beyond the fun there is a lot of pragmatism to be found in cycling London. It is a truly superior way to get around a city with few long straight roads and extremely heavy congestion with really no chance of any vehicle (motorized or otherwise) going above 30 KPH for long. Bikes perform beautifully under such conditions and Londoners clearly realize that.

Amsterdam and Copenhagen get props for embracing bikes but Londoners must be commended for embracing the bike despite the lack of safety measures those bike meccas enjoy.

That a great auto-loving nation can make such a transformation is moving enough. It is exponentially so when considering the parade of fatal accidents London cyclists endure due to lack of infrastructure and untrained lorry drivers. The courage of Londoners through adversity is legendary. It is quite evident that extends to cycling.

Between my two visits, I read of half a dozen Londoners who perished cycling (often very preventably when lorries turned into them unable or negligent in watching out for them). One occurred in Chelsea during this visit. Yet, you still see sights like those in these photos: cyclists threading their 25lb machines betwixt jagged multi-ton vehicles. They carry on with this when it rains. Truly moving.

A refreshing aspect of London's cycling community is the range of riders you find. Some communities have a decent age range but can be a lot of "boys on bikes", often from the same demographic. Not so in London. It has that contingent for sure but it also has a very strong gender, class, and ethnicity distribution.

Also impressive were the number of childseats on the bikes. In the US, one common excuse for not cycling I hear is that it is simply not practical to truck around small children and all their gear. Many London riders show otherwise.

Countless articles in the US lament how to get more women bike commuting. They talk about special infrastructure to coax these so-called timid riders onto the road, etc. However, seeing all the women cycling in London makes you wonder whether that's a factor. From Peckham to Shoreditch and the west end as well, I saw a large percentage of female riders.

There are dedicated bike lanes in London but they rarely last for the whole journey. Despite all the risks and lack of infrastructure, women glide fearlessly among the lorries as often as anyone else.

And, it is not just during rush hour. On a mid-afternoon visit to Peckham, it was mostly women riders: these gals.

The diverse ridership does not stop with gender. In London, you regularly find the gambit of age, class, ethnicity, and style on bikes: not just sometimes, every day. Cycling is now clearly part of every kind of life there.

Here is a sample of those braving the mixed-use London roads.

Since Britain is the home of the Brompton (a global folding bicycle brand), it is no surprise that London sports a lot of those.

Found this Tern rider in Hampstead: sporting the competing folding bike deep in the heart of Brompton country. Glad to see free trade alive and well in the cycling community.

These guys represent a smattering of the different types of bikes found on London streets. The exotic bikes rival all the exotic cars. That middle one looks like a Vanmoof. Very cool.

This "red bike" just looked like a spontaneous custom paint job but to great effect. It was striking as it went by.

One final moving but sad observation about London cyclists is their resolve to endure, not just the kinetic risk of getting hit but, the atmospheric risks of air pollution. Sights like these are still very common.  It illustrates how pervasive car exhaust, particularly diesel exhaust, is throughout the city.

According to a study by Kings College from 2015, 10,000 Londoners die from air pollution annually. Sadly, you can feel why when you ride there. The exhaust is often overwhelming. That is the last thing you want when you are breathing deeply to power a bike. The fact that so many Londoners don't let that stop them is, again, a testament to their resolve.

London cyclists ride despite the lorries, the lack of lanes, the weather, and the air itself. I hope all sides can see their way to let that passion flourish as safely as possible.

Until then, God speed braving the chaos, Londoners! You inspire us all! 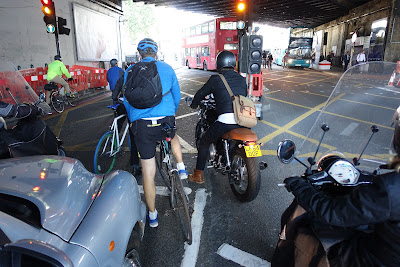