The Agony and Ecstasy Of A Bleeding Edge Bike Commute 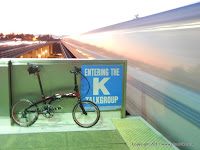 Introduction
This is a love story and a cautionary tale of my first bike commute on my new super light folding bike: Tern Verge X20. 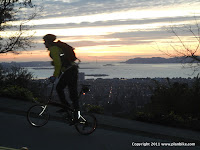 It is safe to say I have a challenging bike commute:
Given all that, I leverage regional public transportation systems all I can to ensure I don't spend 4+ hours a day commuting. 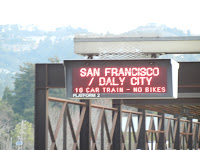 Therein, lies the real challenge for my bicycle commute: public transit bicycle policies. No public transit, except for CalTrain, is very keen on seeing cyclists around rush hour. BART outright bans them for each of the two rush hour periods on their transbay tunnel.
Solution

I was astounded and impressed to find that the Dumbarton is the one bridge from the East Bay that has a bicycle/pedestrian lane all the way across.

This is a heartening fact in the face of the recent Bay Bridge reconstruction that includes a bicycle/pedestrian path that only goes halfway across the bay to Treasure Island (aka a bridge to nowhere).

Then Spring hit. It stopped raining and warmed up enough that other cyclists started having the same idea for crossing the Dumbarton. This ensured that the Dumbarton Express bus racks were always full. I tried getting to it a little early but no dice: still full. After all, there were only two racks.

I quickly realized that the Dumbarton bus route was not a reliable option for a cyclist given the limited bike rack capacity. This produced a real bind. I didn't have time to cycle the bridge everyday and I couldn't reliably get up early enough to beat the bike crowds to the Dumbarton Express bus.


Carpooling wasn't working but, by then, I had really fallen off the wagon with early rising so it felt like I couldn't turn back. Months passed. I gained 10 pounds. I had failed to replace the cycling with another form of exercise. This wouldn't do. 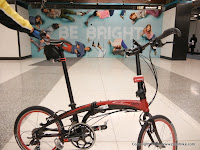 An incredible bike by any measure:
This bike sounded perfect, given all my constraints: 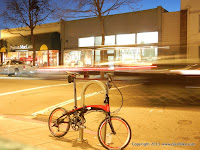 It is here where this story really begins. The first day of bike commuting with this cutting (aka bleeding) edge commuter bike was both fantastic and horrific (no fault of the bike's btw). 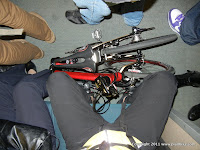 The bike was very stable while I reached 50kph going down 300 meters of vertical. I only added about 2 minutes to the first leg of my commute. Not bad! 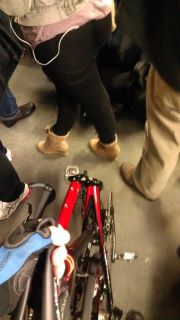 Better still, I walked onto the BART train for San Francisco with no fear of punishment even though the sign flashed "NO BIKES". The train wasn't that crowded so I didn't even bother folding it. But when the train did fill up, I had it in a pretzel in seconds. Even some of the folks on the train were impressed.

Once across the bay, I discovered I had 10 minutes to get to the CalTrain station 2km away. This was a job for the super fast Verge X20.

Again, it performed magnificently, I found the small wheels of the folding bike much more nimble at dodging pedestrians and weaving through cars amidst the morning gridlock of downtown San Francisco.

Likewise, the bike cruised along at a respectable 25kph on the flat long blocks. All my waiting, planning, and spending on this new cutting edge commute tool had paid off. I was leaving all the other heavy and slow commuter bikes in the dust.

One thing I am pretty good at is being prepared for these mishaps. The day before, I had made a special trip to the bike store for spare inner tubes for just such an occasion as this. I had also enquired about extra tires but all the shop had were unfoldables so I skipped those. I figured I would order them soon.
by a tiny piece of metal with a kickass new foldable bike in tow. I went back and gave the jagged metal a good kick to vent frustration and spare someone else the same fate.
Extraordinary Bikes Require Extraordinary Bike Stores


Googling for public transit solutions only embellished the need for a working bicycle in times like these. No buses were nearby and no bus would take me anywhere near the shop. Ironically, CalTrain got the closest to the shop so I walked back to the station, waited a quarter hour, and caught the next train.

The next hour was filled with lots of super fun walking in bike shoes and having the rare cab swiped from me by a business man while I folded my bike. But I finally got to the shop, got the tire and rode to work. Only 2.5 hours late. Woohoo! 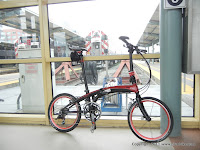 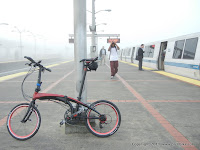 Despite my initial lack of supplies and abundance of bad luck, I have no regrets. The ability of this type of bicycle to negotiate both the capricious bike policies of regional transit systems and the capricious streets of downtown rush hours, should ensure these bikes become increasingly popular. That should mean more stores will carry them soon and, in turn, mean I will have less far to walk for parts.