Heaven on Earth: Bike Transport in Switzerland and Austria 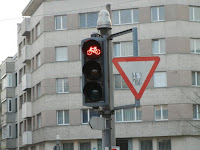 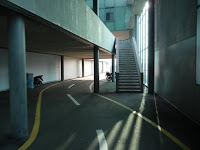 On a recent ski trip to Switzerland and Austria, I decided to devote a little time to sampling the bike transport experiences there. I managed to get out for a look in Basel, Switzerland and Innsbruck, Austria.

High Expectations
Having been to Europe before, my expectations were high. Denmark and the Netherlands are not the only European countries that take bicycle transport very seriously. On previous visits, I had seen the dedicated bike lanes in places like Munich, Germany.

However, this time I wasn't going to any large metropolis with miles of dense population. Those typically have major traffic congestion problems. Increasingly, even in the U.S., large city governments support bicycle transport as one of their traffic congestion solutions and there's already a decent amount of adoption. 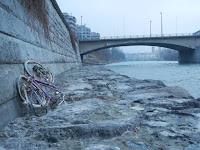 Are Small Cities Any Less Committed?
Smaller cities can be a different story. With less population density, small cities can be less desperate for alternative transport solutions. Back home at least, this can mean support for bike transport is very limited, merely tolerated, or even subject to hostility. The town of Black Hawk, Colorado is now infamous/famous (depending on your perspective) for banning bikes in that small town.

Since Basel and Innsbruck are relatively small, I was not expecting much more than the limited bike support I've experienced in U.S. small cities. I didn't expect the local governments to be as focused on bike transport. I also thought the time of year might limit the cycling activity I would see. 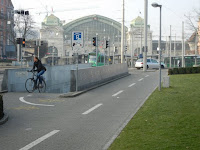 Nevertheless, what I found far exceeded my high expectations for bike transport in any sized town at any time of year. Basel and Innsbruck transport infrastructures not only tolerate but promote cycling as a serious transport alternative by providing comprehensive bike lanes that are not always but frequently separated from BOTH cars and pedestrians. 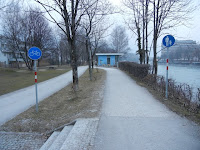 They also provide facilities that address common challenges with bike transport. The goal is clearly to make bike transport very practical and often more convenient than driving or even riding the train. What's more, all these facilities and services are put to good use year-round at all hours of the day and night by surprisingly active cyclists. 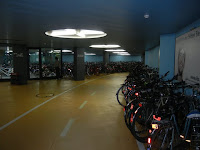 Serious Bike Parking
The first thing that blew my mind was Basel's bike garages. Under their central train station (Hauptbahnhof SBB), is a veritable wonderland for bike commuting enthusiasts. My local friend took me down there and what I saw was a spotless, well-lighted, well-attended, and massive space for intracity and intercity travelers to safely park their bikes at any hour of the day (not just commuter hours). 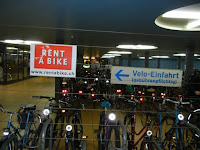 These garages are found at most train stations including the airport in Zurich. They also rent bicycles there. I was able to rent a bike there for less than 20 CHF/day. In Zurich, I found a sporting goods store willing to rent for much less: 60 CHF/week. 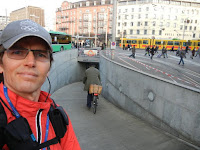 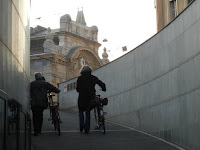 Especially deluxe were the dedicated entry and exit ramps for bikes. I can't describe how riding in and out of the dedicated bike garage ramps instills this bike commuter with a sense of legitimacy. It was truly a profound experience, especially, when contrasted with the cycling experience back home that leaves one feeling like a second-class or even illegitimate member of the transport community. 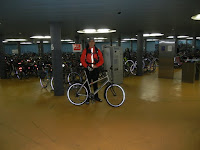 In the U.S., bike parking is sometimes not available at all. It is an ad hoc affair where you bring your own security in the form of pounds of bike locks. Then you might have to walk great distances looking for somewhere to use it. When bike parking is available it is likely to be sparse, outdoor, unattended, and designed to maximize damage to your bike.

How often would people drive if they had to carry a lock with them and drape that lock around a filthy rack at every location they visited? That is precisely the question that many European cities have answered for bikes. The result is a comprehensive set of facilities that make cycling very practical, clean, and therefore easy and attractive. 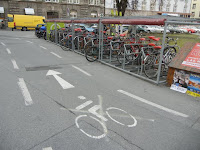 Bike parking in Innsbruck wasn't quite as deluxe as Basel but it was still great. Lots of racks all over. Some were outside and unattended but they were still covered and engineered to ensure one bicycle did not damage another. So refreshing. All this and I wasn't even riding the bike yet. 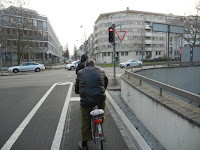 Serious Bike Infrastructure
Once you are out of the garage or off the rack, the support continues in the form of dedicated bike lanes, bike traffic lights, and even bike service stations. All work together to reinforce the idea that bikes aren't just toys that sometimes sneak onto the road to inconvenience cars. They are serious vehicles. 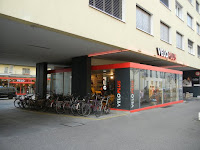 Serious Bike Services
Along those lines, service stations like this one in Basel were a welcome sign. The more ubiquitous bikes become, the more they need ubiquitous services and resources like the ones that autos enjoy. 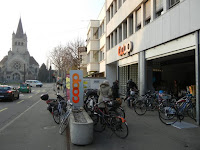 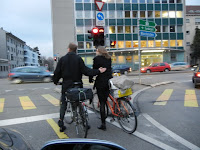 Serious Bike Usage
The infrastructure certainly did its part to ensure cycling is serious transport. However, that wouldn't matter if people didn't use it. My expectations were exceeded here as well. Day or night, warm or cold, rain or shine, male or female, young or old,  folks were using bikes to go on dates, get groceries, and of course go to work and school. 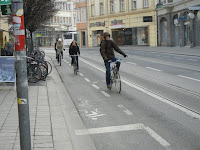 I was pleasantly surprised to see all ages and genders well represented on bikes late at night in freezing temperatures. Back home, just one of these factors is frequently cited as an excuse for not cycling. Here none are. Couples think nothing of going out to dinner on bikes at night, even in winter. 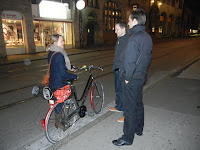 The fashionable folks I spied on bikes knocked down two more excuses for not cycling: that it trashes hairdos and clothes. This gal was having none of that. I found her chatting with these two gentleman at about 10 p.m. at night in about 30 degree weather with a handsome ensemble and a sweet looking bike. 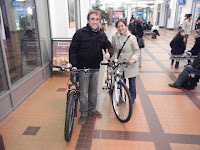 Even during a day trip to Colmar, France, I found these two in the train station running errands on their bikes. I didn't see enough of France this trip to comment on their bike transport experience but some of the same commitment to bike transport obviously bleeds over the border from Basel. 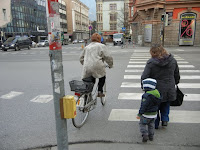 Back home, bike transport is increasingly more mainstream but it still is most popular among young people in major metropolitan areas. Here, the range of ages and backgrounds is very wide, as is the penetration beyond big cities.

All this demonstrates that, with the right attitude and right clothing, bike commuters can experience physical and social warmth no matter when they ride.

Serious Challenge
This trip reinvigorated my resolve to see this level of bike transport infrastructure and adoption in the U.S. It can be done. It will be done, in the U.S. as it is in bike transport heaven: Europe.
Posted by Unknown at 6:37 PM