PlanBike for Motorists: if you must drive, use a bike rack 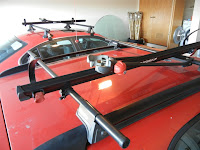 As an avid cyclist and cycling advocate, I have a confession to make: my two-person family has two cars. Even though we live in a metropolitan area, we live high in the hills of Oakland California where there is scant bus or train service. It may as well be the country. When my wife and I both need to quickly return up our 900ft vertical climb (especially with cargo), cars are the only option. 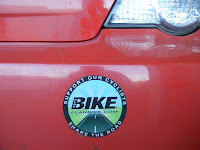 In many metropolitan areas, there is unprecedented effort to expand public transportation infrastructure and its use. Even places known for their auto-centricity, like Los Angeles, have made incredible strides.

Despite all this, in many situations the automobile is still the only way to get around in a timely matter with kids, groceries, etc. Furthermore, budget cuts, planning bureaucracy, and the sheer sprawling layout of many cities mean that the automobile will continue to play a vital role as transport for the foreseeable future.

Optimizing Suboptimal Transport
Nevertheless, suboptimal public transportation is no excuse to simply drive alone in our cars. Instead, the thing to do is find ways to maximize the utility of an auto-based transportation system while we expand the alternative systems. Folks around the San Francisco Bay Area already do that during commute times with something called "casual carpool".

Casual Carpool
People driving alone into San Francisco, go to one of dozens of casual carpool stops where "riders" (total strangers) climb into their empty cars and share a ride into the city. Voila! The car ride is 4 times more productive than if the driver rode alone. The driver gets a discount on the bridge toll, the bridge and subway systems get less congestion, and the world gets less greenhouse gas. And both the drivers and riders leave the house any time they want: no scheduling.

Distance and Time Gaps
All this without any added cost, fancy technology, or even any formal organization. However, casual carpool does nothing for folks needing to get anywhere outside of commute hours. Nor, does it do anything for folks who need to go beyond a few blocks the car's destination. That leaves a huge gap. 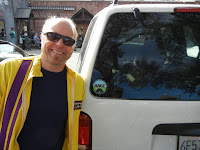 What if these casual carpool motorists had bike racks on their car? That would dramatically increase the range of distances and timeframes in which cyclists could travel.

What if these cyclists and rack-enabled motorists identified themselves with PlanBike bumper stickers (or some other tag) so that they could match up anytime anywhere: not just at a given place and time? That would radically improve overall transport efficiency: not to mention motorist/cyclist relations. 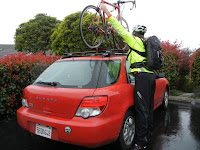 That's essentially what a growing number of my motorist and cyclist friends are doing. It is working so fabulously I thought it was time to share this here.

When my friends run various errands, we take our bikes short distances but meetup with a driver for the long stuff when no bus or train is available or there's little time. Having the rack eliminates the need for the car to back track to the original meeting place.

PlanBike for Motorists Benefits
Redesigning suburban sprawl will take years of political will, trillions of dollars, and years of construction. Until then, let's leverage the rampant car use make everyone more efficient and improve cyclist/driver relations.

This is something anyone can do right now with very little cost and effort that makes a profound impact on global health and environmental issues. That's the PlanBike mission.
If you are a motorist, I hope you'll join motorists that have installed bike racks and give rides to cyclists whenever possible. It is incredibly easy and often rewarding.

BTW - I'm really not selling here because I'm not making any money but if you want a PlanBike sticker, just click this link. I only charge what it takes to recoup my costs and I only spend this on more stickers. :-)
Posted by Unknown at 8:10 PM 10 comments