Cycling to Work Despite Snow and 2010 Winter Olympic Insanity 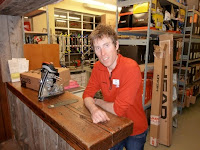 While volunteering at the 2010 Winter Olympics in Whistler, I met my second commuter cyclist from the great white north: Ryan. Ryan is a ski boot doctor at the Blackcomb resort in Whistler, B.C. He cycles to work approximately 3km/day despite low temperatures, little daylight at this latitude, and tons of new traffic and security restrictions related to the 2010 Winter Olympics. 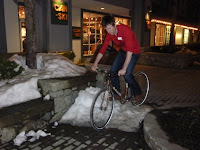 Like Nadine (the other Canadian commuter I've met), he says he has no trouble pedaling through the snow. No spiked tires necessary. In fact, his tires seemed pretty bald to me. Regardless, Ryan is happy to demonstrate that it's not an issue. 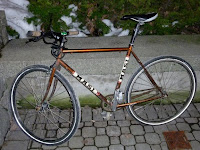 Ryan has cycled for fun and commuting for years so his current commuter pattern has no explicit beginning. However, he says that one of British Columbia's LiveSmart B.C. incentive programs caused him to upgrade to his current ride: a single speed (but not a fixie) with an LED tail light built into the seat post and cork handlebar grips. Yay British Columbia for doing so much to promote cycling. Yay Ryan for braving the cold, the dark, and all the Olympic tediousness to make the world a cooler, less carbonated, place.
Posted by Unknown at 11:14 PM 1 comments