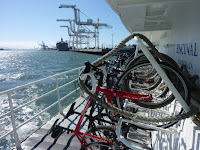 Ultimately, cycling can improve our national security by ending addiction to oil and the violent regimes that control it but we've got several million converts to win over before we get to that. And those folks need to know how to hang onto their ride.

Cycling as serious transport in a country without a commitment to it requires a lot of guts and a lot of great gear. Over the last year, I've gone through a lot of money and strife finding that gear. What follows is one of a series of posts (see visibility, rain/wind protection) sharing my experience with gear and the need it fills. This entry is about security. Namely, it's about how to minimize theft and vandalism while maximizing convenience. With that in mind, I'm highlighting  the systems and tools that help me do that.

There have been some very positive developments for bike security with the proliferation of bike lockers, parking garages, and valets; not to mention, the cool "low-jack-style" GPS/RF bike tracking tools. But first, here are a few quick points about the obvious bike security tool.

Locks
Ever since my brand new Schwinn Continental was stolen outside a bowling alley back in the 70s, I've been searching for a lock I trust. The one I used that time was foolishly feeble: a 1 cm chain with a 3 digit combination lock. I was just a kid. I learned, after the fact, even I could pick this in a couple of minutes. 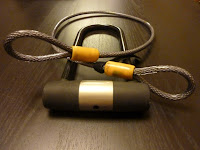 Today, folks (myself included) often favor the "U-Lock". The 2+ cm steel U-shaped bar can be as strong as chains but a tad lighter, and easier to pack. Still, there are issues.

There's not much to be done about the reach issue. Cables come to mind but they can be cut through easily. Chains come to mind but the good ones are really heavy. Neither option leaves you much better off than with a U-Lock. The reaction to this seems to be to use a tiny U-Lock. At least then, you are not lugging much weight and the bits you lock are secure. 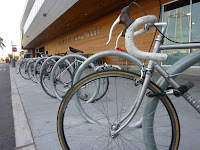 This picture in front the Berkeley Bowl shows a classic example. You could remove your front wheel and lock everything around the back wheel but that means you spend time realigning your wheel with your brakes every time you make a stop which is a sure fire way to discourage bike use. To avoid this, I sometimes use a cable to loop through the back wheel but that boosts the weight and space again. 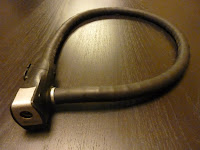 Steel-encased Cable Lock
There is one other option: the steel-encased cable. It's lighter than a chain, stronger than a cable and has the reach the U-Lock doesn't. It still won't thread both wheels but it does go around large posts. The one I use is by ABUS: a great German lock company that makes the Diskus padlock that's been very popular for years. Knock on wood, I have not lost anything so far while using the steel-encased cable.

There's a lot of video on youtube showing the big bolt cutters breaking just about every lock on the market, this lock included. However, it is hard to tell just what they are cutting and the bolt cutting scenario is hopefully an unlikely one if you've picked a good high-profile spot. Other sources say this lock is relatively tough to break. Although, they say it still only takes 3 minutes to get through without bolt cutters. For this reason, I still treat this as a lighter option. 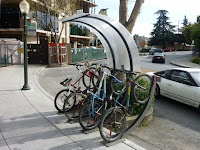 No matter what lock you use, the old saying is still true "if they really want to take it, no lock is going to stop them".  Consequently, securing your bike is really about completely hiding or completely exposing your bike to others. Hiding your bike is great (because noone knows to steal it) but tough to achieve in public so the other strategy is more popular.

Few thieves like witnesses to their crimes. If you can find a well-populated place, then all the lock has to do is keep honest people honest by removing the basic ability/temptation to ride off with your bike. With an ideal parking spot, almost any lock will do. Still, if the bike is facing hours of seclusion, I try to avert thieves with as much armor as I can stand to carry: the U-Lock and a cable.

Locks may deter thieves but they don't do a thing about vandalism. If some jackass wants to turn your rims into pretzels, there's little you can do. One exciting trend in bike commuting that addresses vandalism and the other limitations of locks is the proliferation of bike lockers, parking garages, and valets. 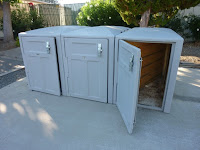 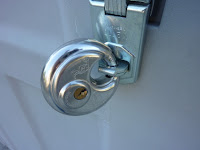 Bike Lockers
Subway stations in my region and my work place don't supply full-service bike parking but they do provide bike lockers like you see here. These are great: at least for day parking. Again, if someone is determined to axe or saw their way into these lockers, there is not much to stop them. Still, even this would take time and make a lot of noise and that would hopefully prompt a witness to call the cops.

Regardless, the beauty of lockers is that they:
I find these very satisfying to use. It is literally a huge load off your mind and your back to have your bike hidden from view in a sturdy container and locked with something not much heavier than your shoes. At work, I use the ABUS Diskus padlock. I even leave this locked to a fence so I have 0 weight to lug around if I want. 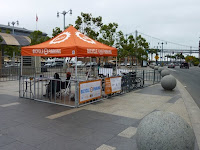 The ultimate in bike theft prevention, of course, are the attended bike garages or bike valets. The San Francisco Bicycle Coalition, provides free bike valet service at ATT Park for ballgames and at the SF Ferry Building during farmer's market on Saturdays.  I can't say enough about the positive effect this has on a cycling experience. It relieves a ton of stress that you typically have when you just lock your bike and it allows you to carry more cargo because you are no longer lugging your own security system around with you. It really is a very profound difference. 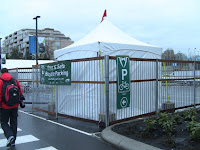 To some, it might sound excessive to have structures built to house bikes but cities are littered with parking garages for cars. If bike commuting is ever going mainstream, the same will have to be true. Here's a nice one in Vancouver during the 2010 Winter Olympics. 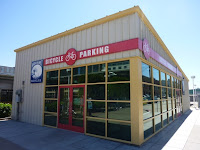 These bike parking services are increasingly common in bike-friendly cities like San Francisco and Vancouver. However, even in those places the hours of operation are limited. The bike parking garage shown here by the SF CalTrain station is closed on weekends. To really support cycling as serious transport, you need to count on these services being available virtually 24/7 so that you can go out as you normally would: without concern that access to you're ride is going to disappear at the stroke of midnight. 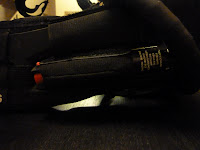 Locks and bike parking provide security for the bike while it is stationary but what about security for you while you are moving? Protection from cars and the elements are best left to infrastructure but there are tools to protect you from other people and animals: for instance, the 9mm  Beretta (just kidding).

Seriously, though.  Lots of cyclists report having things thrown at them. I've personally had people try to block my way and hassle me. I've also had dogs literally nipping at my heels. The latter instance happened while riding in Texas. That experience caused me to buy some pepper spray. It's not much but it's a non-lethal device that can buy you some time to pedal out of harm's way. The pepper spray I've got has a really nice strap with a velcro release. I've mounted it on my pack in a readily accessible spot. Naturally, now that I have it I never have cause to use it. That's fine with me.

Cycling amongst roads and drivers that don't want you there can be stressful enough. The tools and services profiled above have helped me mitigate that stress by maximizing convenience and piece of mind.

UPDATE: Low Jack Option
Although I try to only post about stuff I've actually experienced or tested, one thing on the horizon of bike security that is too promising to ignore is the use of GPS and radio transmitters to have your bike broadcast where it is if it ever gets stolen. Currently, this only appears to be used by law enforcement as bait, e.g. UOP is fighting a bike theft epidemic with such a system. Nevertheless, if a consumer product ever becomes available at a reasonable price, it could be a great thing. How satisfying to end forever that horrible feeling you will never see your bike again or know anything about where it went. Given the escalating prices of high end bikes, I am betting we'll be hearing a lot more about this option.
Posted by Unknown at 11:40 AM 9 comments