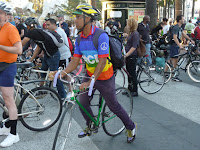 Friday was the 18th Anniversary of San Francisco's Critical Mass. At 18, it is still not quite legal but very mature. Gone are the days of violent clashes with cars, cops, and pedestrians. There's still plenty of anarchic behavior but (for the moment at least) a really beautiful balance of temperance and tolerance is at play within all sides.

Many motorists still detest Critical Mass. Even as a cyclist, I am not fond of the Critical Mass logo with a fist running between two wheels. I'm all for vigorous debate but I don't think slamming your fist on somebody's hood, or running cyclists over, is the way to do that. Fortunately, I think a lot of cyclists and motorists, at least in San Francisco, have now come to the same conclusion. 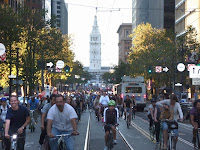 The event still involves a lot of police but they protect cyclists as much as they contain them. Cyclists still take over intersections with impunity but they take an otherwise mellow tone with the police and bystanders. Bystanders still bad-mouth (and throw water balloons) but show a lot more tolerance overall.

A lot of this may just stem from the event's age. Almost everyone in town now has heard of Critical Mass so they enjoy it if they love it, avoid it if they don't, or know it will be over soon either way. Also, cyclists seem a lot better at not giving or taking the antagonistic bait. 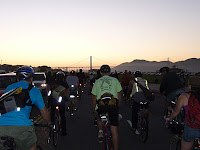 Regardless, this was an awesome Critical Mass. Indian Summer was in full effect on this Friday in September. There was no fog in sight nor chill that accompanies it. The balmy sunset provided a suitable backdrop to a tour of the most beautiful city on earth. This was my second Critical Mass. The one I did last year was fun but this one was even better. The great weather definitely played a part. 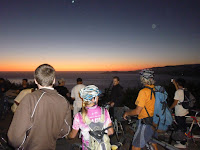 The warmth wasn't just in the weather. From the cyclists, to the trapped motorists, to the motorcycle cops, everyone was remarkably warm towards each other. Rolling alongside fellow travelers without being encased in a sound-proof steel container is an experience unique to cycling that makes it hard to alienate or feel alienated. The sheer vulnerability of yourself and those around you makes you want to be more social and afraid to be less so. Critical Mass is a great reminder of how powerful this aspect of cycling can be. 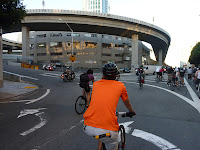 Cyclists still exercised plenty of free will on the ride. We literally rode circles in the middle of Market and VanNess without warning. The course is never pre-defined. Folks decide at each stopping point what is going to happen next. This week that included attempts to cross both the Bay and Golden Gate Bridges. A half dozen CHPs and SFPDs at each on ramp put a damper on that plan.

That didn't stop us from overtaking every intersection and street between bridges. It also didn't stop some cyclists from expressing themselves beyond simply taking over the street. The ride contained no less than 6 nudists, 3 DJs, 1 bubblist, and lots of weed.

Nudity is semi-legal in San Francisco. Last year, the cops hassled the naked guys pretty bad and most seemed to disappear well before the end of the ride. This year, however, folks who bared it all stayed in as long as they wanted.

The only hassle the DJs endure is getting 30+ pounds of batteries, cargo bike, and speakers up San Francisco hills. For that, and the awesome music, they are treated like heroes on the ride. It's great having more than one so you can sample many grooves that range from funk to country and western.
Great stuff! 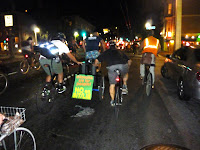 Likewise, nobody was worried about the weed. The cops seemed focused on just keeping Critical Mass away from the bridges and the street traffic away from Critical Mass. Given that marijuana legalization is now on next state ballot, this seems like the right focus. 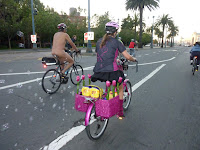 Ironically, the bubblist received the most heat and it came from other cyclists. After all cyclists have been through, it was sad to have the most antagonism coming from within over something so trivial.

Perhaps this is a symptom of cycling's recent success. It has never been more popular in the U.S. with major cycling initiatives underway in most major coastal cities. That's just the circumstance when balkanizing tendencies can erupt. The helmet debate is dividing cyclists just when this marginalized population can hardly afford it. Fortunately, the anti-bubble noise was balanced out by cooler heads who just wanted to ride in peace. I hope the helmet debate will resolve before it damages adoption of cycling in general. 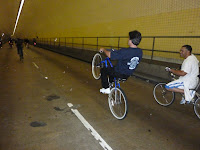 Intangible Benefits
Crossing intersections, or riding wheelies down the middle of the Broadway tunnel, without fear of oncoming cars, police, or most bystanders puts one in a mood that is hard to describe. It makes you feel incredibly relaxed and welcome. It also erases a lot of work and personal stress. 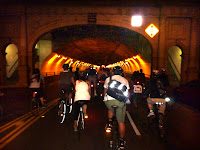 The power of cycling to promote social cohesion, trust, and stress reduction, often gets buried under its more tangible benefits of efficiency, economy, and fitness. Nevertheless, these intangibles are potentially more important. What part of the world couldn't use more peace between people? These intangible effects have always been apparent to the Critical Mass participants but it seems increasingly apparent to police and bystanders. 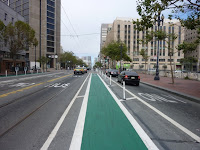 The current success of Critical Mass with both participants and non-participants is an opportunity to help expand cycling massively. It's time to scale cycling and all its benefits to more than one day a month and beyond coastal cities or enlightened college towns.

Many cities in Europe have already achieved this. They have permanent and pervasive cycling infrastructures and cultures. This looks increasingly possible in American cities like Portland, San Francisco, New York, and even Los Angeles but it's nowhere near certain in these places and far less so in many others.

A rare but narrow window is now open for cycling but it may close soon. Places like Omaha have introduced new cycling initiatives but they are enduring fierce skepticism. Unprecedented numbers of Americans are fed up with the physical, environmental and economic havoc wreaked from cars and oil. However, the electric car may soon mitigate the public's distaste for cars by appearing to remove smog and CO2 from the equation. This may distract everyone from the other benefits of cycling.  Given all this, cyclists need to act now to build and spread the momentum cycling currently enjoys. 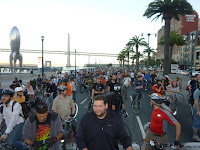 If Critical Mass doesn't inspire motorists to support more cycling infrastructure, I hope it inspires the participants to do so. Critical Mass is avowed to be unstructured. There's no leader or group controlling it. While this is a key part of its attraction, I hope its thousands of participants show equal passion for cycling in more structured ways as well. If folks lobby and vote for cycling with the same gusto that they party at Critical Mass, our cities will be the better for it.
Posted by Unknown at 3:58 PM 12 comments