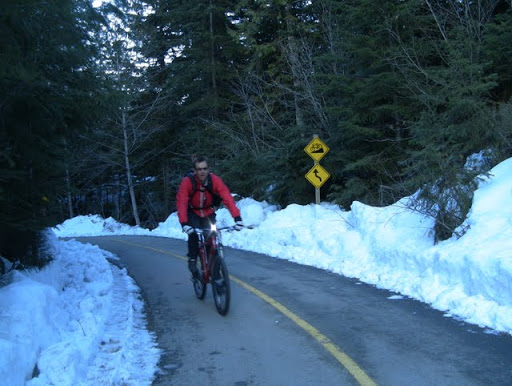 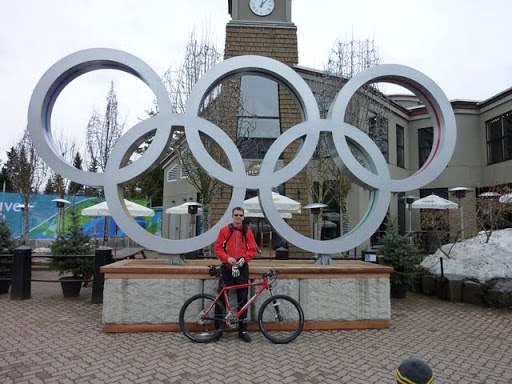 When I decided to bring my bike to the 2010 Olympic Winter Games, a lot of folks questioned the idea, including a lot of locals. Everyone cited the obvious: winter weather. The locals also cited the fact that the roads between key points in Whistler were not particularly bike-friendly. The bike lanes are in place but some parts just run along a very busy highway that includes the traffic from a pretty good bus service. Despite all this, I brought my bike. To be honest, it has been a mixed bag. I found both great and lousy bike lanes since being here. (See Part II of this story for more great trail photos.) 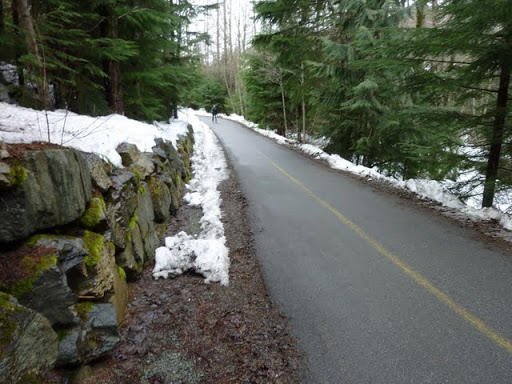 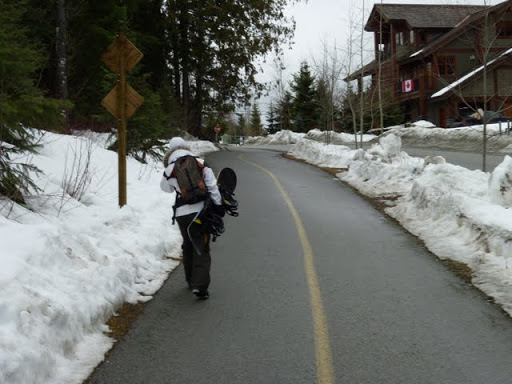 Some, like this one, are great. Passing through lush green forests or quiet neighborhoods, they leave one feeling perfectly serene and secure. The breathtaking backdrop of the Whistler mountains puts the experience over the top. A simple ride to the barber and grocery store was a delight and a decent workout, even if I did have to share the path with the occasionally knuckledragger. 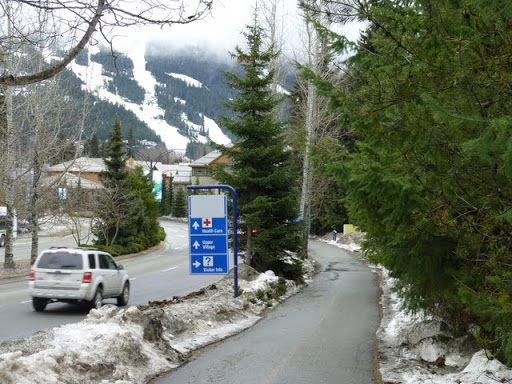 Sadly or happily (depending on your view of climate change) the weather has not been a factor. Although the weather has been unbelievably warm, the first week did manage to throw a few cold rains at me. That did make the ride home from the barber a bit hectic and messy when taking the highway bike lanes. However, the worst of that was the car traffic, not the rain. I'm told there's a dedicated bike trail, totally off the highway, between Creekside and Whistler. I'm determined to find it before I leave. (See Part II of this story to see what I found.)

Though nice, the mild weather, is kind of a bummer, at least, for me personally. First, I really wanted to see how snow cycling feels. Second, it is just plain disconcerting to have weeks of spring-like conditions in the middle of February. One wonders if we really are witnessing climate change at the Olympics which in turn makes one wonder how much longer a winter Olympics will even be possible except at the highest latitudes. Vancouver is already pretty far north. Are the games going to have to move to the arctic circle in my life time?

What compounds these concerns is seeing how ungreen winter Olympic events are. This is the greenest Olympics ever. All the disposable cups, cartons, and silverware are compostable. Some of my volunteer uniform is made from bamboo (super soft too) because it is far less resource-intensive than cotton. A lot of the new buildings are self-sustaining with regard to water and power. 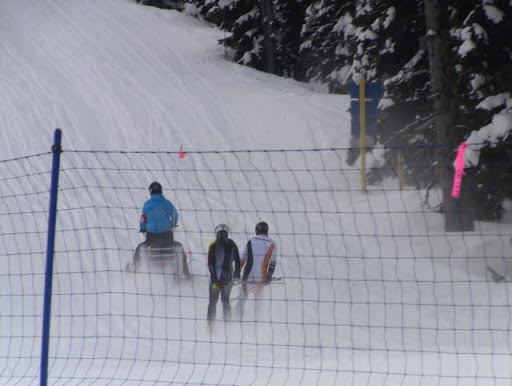 Nevertheless, there is still the jet fuel for helicopters, the diesel for snowcats, the gasoline for snowmobiles, the water for snowmaking machines, the plastic for all the decorations, the merchandising, the temporary construction, etc., etc. All this is still part of the games. There's no question that events like these will always be resource-intensive but there's obviously a lot more to be done to improve the resource footprint for an event like this. The spring weather in February has been a constant reminder that more had better be done soon.

British Columbia and VANOC missed a great opportunity to discourage car use by upgrading the Sea to Sky highway rather than upgrading the rail system. The Alps are littered with ski resorts where the train station stops just steps from the base of lifts. I've personally seen people getting on the train in their ski boots in downtown Munich. They can do that because the train system there offers virtual door to door access to numerous ski resorts. Imagine all the traffic jams that occur during snow storms replaced by train loads of people drinking hot cocoa (or even something stronger) during their relaxed journey from town to the slopes. Now stop imagining it because British Columbia and VANOC missed a great opportunity to embellish the European village atmosphere they've developed in Whistler by perpetuating the North American emphasis on the car.

Nevertheless, train systems beg lots of other questions that ultimately reduce to the larger question of what type of transport will dominate in a given society. In order for a rail system to work, it has to go virtually everywhere. Vancouver has no pervasive subway system or light rail so how would it deliver people in large numbers to the Sea to Sky rail system? How would people get to the few subway stations? By car? If so, then that would defeat a lot of the purpose.

Still, even half-measures were passed over: like promoting bus use rather than car use. The world famous ski town Zermatt banned cars years ago. It is only accessible by train but there's no reason you couldn't introduce bus-only access to Whistler to create a similar car-free ambience in the village and remove the need for a highway upgrade by virtually compressing the added traffic volume into buses.

If nothing else, I wish VANOC (Vancouver Olympic Committee) would have refrained from hauling Wayne Gretzky (the final torch bearer) in an SUV to light the Olympic cauldron. This is traditionally a runners task so it seems particularly gratuitous, untraditional, and antithetical to a green event to put the would-be runner in an SUV. Anything but that. Why not a bike? What a great symbolic gesture that would have been to have "the great one" hop on a bike (Canadian-made even) to travel to the torch in a reasonable amount of time.

Regardless, what has felt good is fulfilling the planbike mission to send a message with direct action to all the guests of the Olympic games that bikes work anywhere and anytime and, with the proper scale of adoption, could be an important component to keeping the world inhabitable and some snow on the mountains. The unseasonably warm weather, for me, makes this point even more important to make. It was also heartening to find out I wasn't alone. Found this gal, a fellow volunteer in her blue smurf suit, out at 4:30 a.m. on her way to work. Cycle on girl! 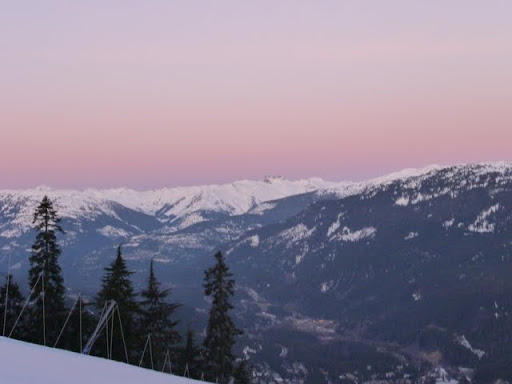 The ride to Whistler is so beautiful, it is a shame that anyone has to keep their eyes on the road during the journey. Nevertheless, I'm enjoying the games, enjoying the scenery, and enjoying the bike.

See Part II of this story.
Posted by Unknown at 9:13 PM 14 comments