Running Errands By Bike in the East Bay: All Kinds of Ways

While running errands on my bike this weekend, I saw so many others doing the same. It was  cool seeing all the different ways folks were getting it done.

My errands started just before dark on Friday evening. I shrugged off my usual reticence to ride at night and do some shopping after work like I would with a car. Given what I've invested in my Exposure light, why not? 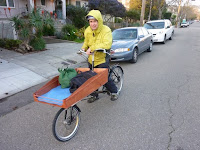 While riding down Shafter (a nice unofficial bicycle boulevard), I discovered Randall on his Bilenky cargo bike. This Bilenky had a huge wooden tray in the front where Randall had a couple of large bags stowed. The bags took up only a fraction of the space available.

Randall says he has hauled as much as 130 pounds on his cargo bike. That's a 90 pound sack of cement plus tools. Incredible! Still, he warned that kind of load is untenable on any kind of hill. A more manageable maximum weight seems to be 60 pounds. That's still not too shabby. That's most people's groceries for the week. Randall says he's been really focusing on using his bike as his primary transport vehicle for 3 years. He laments still having a car and using it for some things. Nevertheless, he gets quite a bit done with his Bilenky.

On Saturday I ran some more errands by bike. After seeing Randall, I decided to take it up a notch and haul a 2 foot long box to the post office even though I don't yet have a rack on my bike. Using some old inner tubes, I managed to lash the box to my backpack reasonably well. It wasn't pretty but I got it done.

After that, I did more shopping on University Avenue and then a birthday party on Piedmont Avenue.  That totaled 20 miles of riding.

On the way to Piedmont Avenue, I came across Johnny who was getting it done without a rack as well. No Bilenky cargo bike here yet he's hauling his guitar and a few spare wheels. Go, Johnny, go! I've got to get some straps like that for my backpack.

It was great seeing so many of my fellow east bay residents realizing PlanBike with such gusto. Personally, I felt like a lightweight. Although I commute a lot and run a lot of light errands on my bike, I've been torn about how to haul serious cargo by bike to my house at the very top of the Oakland Hills. Given what Randall says about the hills, a Bilenky seems out of the question.

Currently, I ride a carbon road bike. The carbon makes the 700 foot vertical climb I do most days very manageable, even with my laptop. However, most bike shop guys I talk to tell me carbon doesn't take kindly to being bolted to metal racks, whether they be stationary trainers or cargo racks.  I guess I'm gonna have to bite the bullet and use my heavier mountain bike with rack to get things up the hill. Regardless, I'm even more inspired after seeing all the activity down the hill.
Posted by Unknown at 9:28 AM 7 comments