The Road to Lampasas

In August of 2009, I decided to take bicycle commuting up a notch by cycling 90 miles from Austin to Lampasas to surprise my family at my grandmother's 90th birthday. I flew into Austin airport, ditched my bike box at a local bike shop, then started pedaling with nothing but a 10 lb. backpack full of water and spare inner tubes.

Before I got to that point, I did a ton of research. Given that it was a ride in August, in Texas, on roads I didn't know, over distances I'd never ridden, I didn't want to end up like this rattle snake here. To avoid that, I queried all the local bike clubs in Austin to which I am eternally grateful for all of there really detailed information and advice. For instance, they knew that there'd be coverage for my iPhone because AT&T has its headquarters nearby. That info was a huge help.


The one thing none of the locals were too sure about was the right route to take beyond Austin city limits. They knew the outer limits of Austin but noone seemed to know the road to Lampasas. I tried to clarify things on Google maps and found what looked like some great semi-retired roads like the "Old Austin Highway". Judging from Google's street view, which has awesome coverage of these roads, it looked like these roads would have very little traffic and be in decent condition. Still, they might be windy or the pavement could stop and start in between Google's street view pictures. Trekking on these for 90 miles in late summer without local input was a bit unnerving but that provided a sense of adventure I was hoping for anyway. Besides, I figured in the worst case scenario I could leverage the awesome phone coverage to get some help.


Here's a map of the course I worked out. The one bit that I didn't actually do was the bit from the airport but the rest is pretty accurate:

Flying to Austin
The goal for this trip, other than to surprise the hell out of my grandparents, was to use no cars in getting from my house in the Oakland, California, hills to grandma's house in Lampasas, Texas. With one exception this is what I did. The exception was due to the need to pack the bike for air travel. I could find no way to get a road-ready bike on and off a plane. You had to pack it which meant partially dismantling it. I considered just renting a bike when I arrived like I did in Australia but getting a good fitting rental is a challenge I wanted to avoid on this trip, given the heat and the greater distances. 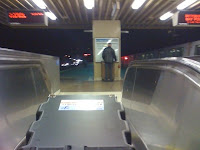 Once I decided to bring a bike,  the need to pack it before I left home meant getting to and from airport by bike was out of the question. No matter what, I was going to have a huge package to carry to the SFO airport. Likewise, I now had more issues to deal with once I got to AUS airport. Thanks to 911, there is 0 storage at Austin airport so I couldn't leave the box anywhere near there. Even if I could, dismantling and rebuilding the bike at the airporat would probably freak out security. To avoid these issues, I resorted to taxis. 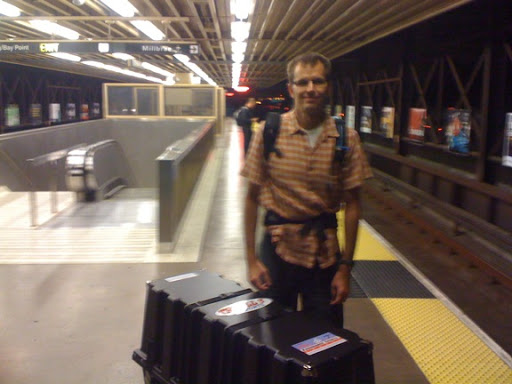 Since testimonials I've read said tape and packing material were incredibly time-consuming and ineffective at protecting your bike, I settled on using a large plastic bike case that would minimize the dismantling I had to do wherever I stored the box. Here's the case and I waiting for the subway (BART) train at 5 a.m. 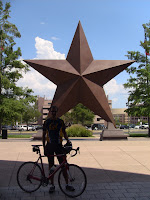 The other issue affecting the ride was arrival time. No matter how early the flight, it seemed like I could only get to Austin in the afternoon. Starting a 90 mile ride just before Austin rush hour in 100 degree heat didn't sound tenable so I divided the ride up into 2 legs. I'd get from the airport to Cedar Park which is ~30 miles north on the first leg then do the second leg at the crack of dawn the next day in the coolest air of the day. 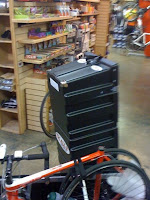 From Austin airport, I took a taxi with the box to an awesome bike shop, AustinTriCyclist, that was willing to store the bike for free in their attic.  Too cool. Huge thank you to those guys. They even lent me a few tools to get the bike back together. 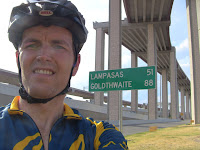 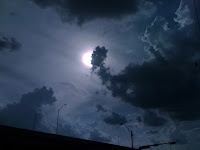 From AustinTriCyclist, I weaved along the north west part of town. Temperatures ranged from 95 to 102. Surprisingly, I adjusted pretty quickly. Things were a lot hillier than I expected but coming from Northern California that was manageable.

The only risk to the first leg was weather. About 10 miles south of Cedar Park, what looked like storm clouds started forming. Although my pack and clothes were waterproof I've been to Texas enough to know I didn't want to be riding in a real Texas rain: rain so think you can hardly see in front of you, not to mention wind and lightning. This sky looked like it could turn into something but luckily it didn't. I made it to Cedar Park just fine. Being conservative on the first leg seemed to have paid off. 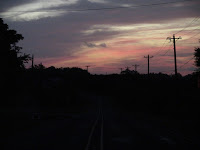 Starting out the next morning at 5 a.m., it was already about 70 degrees but this was a welcome contrast to 100+ the previous day. I was greeted with this inspiring sky.

The Google Maps app on my iPhone was doing a pretty good job of helping me navigate the car-less route I had plotted before I left. As promised by the locals, the AT&T coverage was fantastic (a strange feeling for a Californian where the coverage sucks). The worst part of navigation was keeping the humidity and sweat off my iPhone's touchscreen and conserving the iPhone battery by not loading the map too often.

Bad Surprises
Despite the great maps and great wireless coverage I encountered surprises that all this technology couldn't match: recent changes to the roads. About 10 miles north of Cedar Park, I encountered a detour on the county road that routed me to the much more dangerous main highway. A few miles of riding on the freeway in the dark made me look for a short cut. The good news: I found one. Woohoo! The bad news: I discovered about 4 miles into the short cut: the last leg of the shortcut was dirt.

The iPhone version of Google maps didn't display street view at the time of my ride and given the battery consumption required I probably wouldn't have used that anyway so all I knew about the shortcut when I took it was the line I saw on Google maps.  On a road bike with 23 cm tires, I decided not to risk riding over dirt in the dark. I was starting to think my luck was running out. Turning back meant 3 bad things:
Of all this, I was most worried about the dog. This dog was serious about biting. On the way toward the shortcut, I had barely managed to outrun the son of a bitch while he was literally nipping at my heels. Now I had to go back past him. Ugh!!!! With no other options, I bit the bullet and headed back towards the dog in the dark. Sure enough he was still there: mean as ever. I got up to ramming speed as best I could and, luckily, outran him again. Phew! Thanks to that dog, I now carry pepper spray on all my rides. 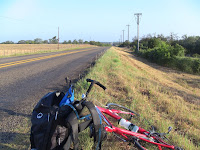 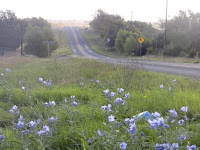 This episode provided the drama that makes for a great trip but at the time I was worried it was the beginning of more problems. Luckily, it wasn't. I eventually finished the detour and made it off the main highway around daybreak. I was able to stay on the county roads I had mapped for the rest of the trip. Many of these roads were just beautiful, as you can see here.

The rest of the ride was a fantastic procession of classic Texas countryside: tan rolling hills, blue flowers over green meadows, cattle, rattlesnakes, buzzards, hawks, epic clouds, and epic ranch gates. I also encountered really friendly Texas folks. I had no episodes with angry motorists. I'm thinking I have Lance Armstrong to thank for that. The worst of it was the dog. 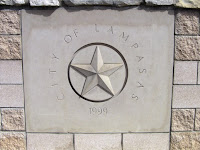 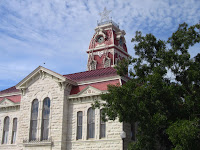 I arrived in downtown Lampasas before noon. Even then, it was only 85 degrees. Success!

I highly recommend the road to Lampasas for cycling. Lampasas is a cute little town that's a nice distance from Austin over some beautiful country roads. With the growing number of beautifully restored houses in town and a beautiful hot springs nearby, it makes for a nice weekend destination for cyclists. Here's the town hall. After tooling around town a bit, it was time to find grandma's house and hopefully not give her a heart attack before her 90th. 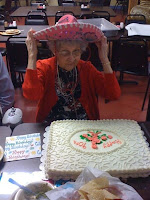 Here Grandma is on the big day enjoying her family and her pink sombrero. Sadly, she died before her 91st this year but that makes me so much happier I took the plunge on this ride.
Posted by Unknown at 9:53 AM