After the Giants won the 2010 World Series, there was the usual mayhem in the streets the first night. Several fires were lit. Buses were stopped dead in their tracks and used as grandstands. One motorist foolish enough to try to drive through a crowd was taken out and beaten and his car was trashed. For me, that all added up to a nice cycling challenge: how to get around insanely crowded streets during events like these.

Some of my friends discouraged me from taking the bike. They thought the density of pedestrians would make it problematic. There was probably no way for any vehicle to negotiate that scene the first night. However, I thought the bike might negotiate the traffic snarls that would inevitably surround the parade area 2 days later. This event should be a bit more organized and so have a bit more space to get places. I decided to find out. 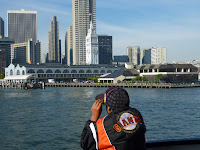 San Francisco has a metro system called BART but one of its many shortcomings is the fact that it doesn't allow bicycles on the trains during rush hours. This is precisely when you want people cycling, i.e. not driving, it seems to me. Nevertheless, BART was out for getting into town with the bike on parade day so I decided to take the ferry. This turned out to be an excellent choice. It accommodated bikes no problem. It was a nice sunny day and beautiful ride. Better still, it was not crowded at all even though BART was a mad house. I love it when the path less traveled turns out to be the best. 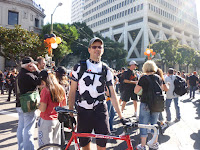 From the SF Ferry Building, it was a breeze pedaling along the embarcadero a few blocks, then in a few blocks to the base of the Transamerica Building where the parade was starting. I literally pedaled right up to the blockade, and parked my bike. Sweet! And totally impossible with any other vehicle. I was off to a great start.

I was a bit worried about locking my bike. I doubted anybody was gonna show up to the parade with bolt cutters but I did worry about crowds kicking or crushing my bike if things got super wild. Still dreaming of a day when there's ubiquitous bike parking, I bit the bullet and locked it to a parking meter without incident.

Once done, it was time to relax and enjoy the parade. Although it was heavily front-loaded with everybody except the players, it was a great show. For starters, there were bicycles in the parade. Cool! Bicycle taxis had been utilized to cart a few sets of VIPs down the route. Unfortunately, I didn't recognize who they were but it was great to see the bikes there anyway.
After a long stream of back office staff that were enjoying their day in the sun along with the team they support, some familiar faces started to arrive. The mayor, Gavin Newsom, one of the senators, Diane Feinstein, and the icon of Giants baseball, Willie Mays, all participated.

Finally, the real stars showed up. Sergio Romo, Matt Cain, Madison Bumgardner, Buster Posey, and Aubrey Huff, were all on display. They each got their own end of a trolley-style bus in which to bask in the glow of being the first Giants to win the World Series in 56 years. Unfortunately, for baseball ignoramouses like myself, a lot of them were on each other's trolley. I didn't know who I was looking at. The worst was "Sergio Romo" who sported "the beard" and park himself inside Brian Wilson's  bus. Fun stuff.

I'm not a big baseball fan but I found the details of this team's win very interesting and moving. 56 years since the last win for the Giants. Never a World Series win on the west coast, despite participation in a couple. Almost as interesting were the team members themselves. These guys are like the Bad News Bears or something. In interviews, more than one expressed surprise and gratitude for having a job at all this season. And now they are World Series Champs. Right on!

After the parade, I took a ride down the peninsula on CalTrain to see what that was like. Thanks to some considerable lobbying by cyclists, CalTrain has had dedicated bike cars for years. Nevertheless, try telling that to thousands of weary and/or inebriated Giants fans when they want to go home. The bike car was difficult to get a bike into, to say the least. That said, I have to hand it to the conductors that fearlessly guarded the space for cyclists. Thanks, guys!

While waiting for the conductors to get all the occupants in order, I bumped into Tim Ryan, a reporter for CBS News Radio. It turns out, he's a hardcore cyclists both for sport and for transport. For fun, he does solo bike trips over the Rockies. For work, he sometimes take his bikes on a story. So cool! Today, he was taking his bike on the train for the same reason I was: to have an elegant way to quickly zip around the crowds while he reported on the event.

He says he doesn't always bike to work but does so when it is a good fit for his itinerary on a given day. He's also done this in other cities he's lived and worked in as a reporter. Meeting Tim and hearing how cycling helps him do his very dynamic, time-sensitive, job embellished my positive bike commute experience to celebrate this historic event.

Given how well it worked for me and how well it seems to work for demanding bike commutes like Tim's, I wouldn't hesitate to ride my bike into such crowds again.
Posted by Unknown at 11:11 PM