Cargo By Bike: Christine Gets Her Worm Farm 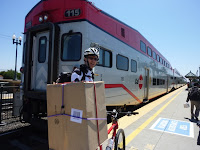 Yesterday, I came part way towards my goal of extending my cycling habits to include more cargo hauling. Living high in the Oakland hills has made bike commuting a challenge but I manage so long as my payload stays under 15 pounds. A cargo bike could help with larger cargo but the hills under my house are so steep even a cargo bike would be a challenge. Nevertheless, an opportunity arose to try hauling larger loads even on my regular bike.

My wife has used a worm farm to produce compost from food scraps for years now. My friend Christine decided she wanted to try it. Soon after, a "Wriggly Wranch" arrived at our house for Christine. However, Christine lives on the other side of the bay. We should have just shipped it direct but didn't. What to do? 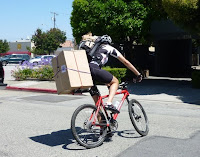 I typically use the bike and CalTrain to get to the peninsula but  the weight (25 pounds) and size (16 inches x 24 inches x 16 inches) of the Wriggly Wranch had me thinking I'd bite the bullet and drive. Nevertheless, after a few minutes with my mountain bike and some bungy cord, I had the Wriggly Wranch resiliently, if not firmly, fastened. The weight was the maximum my minimal bike rack supported but with most of the distance covered by train, I thought the rig I set up would make it. And since the course for the cargo was all downhill, I felt I would make it as well. I simply had to get the cargo one way. The return trip would just be a typical ride home. Given all this and the PlanBike mission, I had to give it a try. 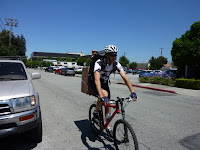 The strategy with the bungy was to allow some teetering but not a full-blown release. 4 bungy cords criss-crossing the box and hooking to the rack and the rails under my seat did this beautifully. I tested this by jerking the bike side to side by 2 feet. The box teetered but always returned squarely to its position on the rack. Beautiful.

The trip down to the subway station was pretty typical. I cruised down hill at 25 MPH. Banked turns as usual. Having the box 24 inches off the rack presented no problems.

Getting to the subway platform required the elevator. Lifting the bike over the stairs felt unwieldly since the bike was over 50 pounds at this point, not counting pounds on my backpack. The only tricky part about the elevator was ensuring you pay properly. It's possible to go straight to the platform on the subway (BART) elevator. I had to double back to pay and then head up. 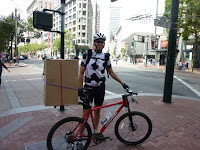 I got off the subway (BART) in downtown San Francisco, then rode over to CalTrain south of Market Street. The two train systems actually meet at Milbrae but their schedules don't. This is yet another challenge for public transportation users. CalTrian travels at hourly intervals so depending on when the subway (BART) arrives you can wait an hour for a connection that takes you down the peninsula.

Nevertheless, commuter cyclists have a second chance to synch with the CalTrain schedule by getting off the subway in downtown SF before Milbrae and then darting over to the San Francisco CalTrain station. Pedestrians would struggle to pull this off because it is over a quarter mile between subway and train stations in downtown San Francisco. The pedestrian travel time would be a significant portion of the hour you might wait in Milbrae. 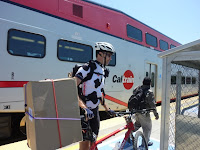 On this trip, the subway/CalTrain connection worked out perfectly. A train was waiting when I biked over. I had to hoist the bike up a few stairs which was a challenge. The train was off in minutes. The whole trip down took 90 minutes. That's triple the time a car would take but still reasonable, especially for a Saturday. Even so, these travel times could and should improve. Cities more serious about public transportation infrastructure have trains running every half hour and subways running every 5 minutes. With those intervals, the travel times become much more competitive with cars. Doubly so, if you factor in traffic jams and parking delays.
More frequent buses and trains with space for bikes would really boost adoption of all these alternatives. 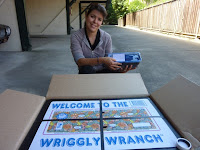 Regardless, the Wriggly Wranch made it down to San Carlos intact. Here's a picture of Christine opening the box and the fresh container of worms my wife donated to Christine's new project. Thanks to both of them for helping with this post. This excursion has boosted my confidence biking with cargo. My repertoire for cycling as serious transport is forever expanded.
Posted by Unknown at 2:13 PM